We are using this week's "Rare Beer Tuesday" time-slot to give everyone advanced notice of our tapping of Ballast Point Sculpin IPA for growler fills starting tomorrow (Tuesday) at 5pm!  In the opinions of some, this is the greatest and most highly sought-after IPA that we get, and we rarely get enough of it to be able to announce its arrival, so here it is!  Don't miss out this time!

Rare Bomber Thursday (9/9)
For "Rare Bomber Thursday" this week, we are very proud to announce the South Carolina debut of Hopfenstark Brewery, brought to you exclusively by The Charleston Beer Exchange!  Hopfenstark hails from Quebec, Canada.  All Hopfenstark beers brought into the USA are draft-only, and are unbelievably uncommon to find on-tap anywhere!  This week's beer will be their amazingly rare "PostColonial IPA", which is a recreation of/homage to the beer that spawned the style "India Pale Ale"!  It comes in at 6.5% ABV and is reddish/orange in color with a subtle, floral hop aroma and well-balanced hop/malt flavor profile.  This will be available for sale in pre-filled 22oz bomber-style "growlers"starting Thursday, 9/9 at 5pm.  Click HERE for a reminder of how Rare Bomber Thursday works.

Beer vs. Wine Dinner at Ted's Butcherblock (9/23)
Please join us September 23rd at Ted's Butcherblock for a unique twist on our monthly beer dinner!  This time around we'll be pairing both a craft beer and a fine wine with each course.  Which pairs better?  You be the judge!  Sure to be a great time for wine and beer enthusiasts alike!  Reservations are required.  Call Ted's at (843) 577-0094 or visit their website here.

Remember, you can always see what's live on our growler station by visiting our website at TheCharlestonBeerExchange.com and clicking "News/Growlers"!Follow us on Facebook and Twitter for real-time CBX news and updates!Cheers,The Charleston Beer Exchange
14 Exchange Street
Charleston, SC 29401
(843) 577-5446
http://www.thecharlestonbeerexchange.com

OK boys and girls, this is a big one!

Rare Beer Tuesday (8/31)
We are thrilled to announce that tomorrow for "Rare Beer Tuesday" we will be filling growlers of the Stone / 21st Amendment / Firestone Walker collaboration beer called "El Camino (Un)Real Black Ale" starting at 5pm!  This is the one and only keg of this beer in the entire Southeast!  Check out the reviews for it on BeerAdvocate and RateBeer!  Scott Sheridan from Stone Brewing will be on hand to answer questions about this beer and all things Stone!  We don't know how long this will last, so please get here at 5pm so you don't miss out!

Rare Bomber Thursday (9/2)
Our "Rare Bomber Thursday" beer this week is the very delicious and draft-only Bell's Poolside Cherry Wheat Ale!  This was carefully counter-pressure filled and capped by us a few days ago and is ready to accompany you at your favorite poolside location while the heat is still with us!
Click HERE for a reminder of how Rare Bomber Thursday works. New Arrivals/Back In Stock (Bottles/Cans)
Allagash 2010 Fluxus
Abita Save Our Shore (SOS)
Bell's Octoberfest
Highland Clawhammer Oktoberfest
Hoppin' Frog Frog's Hollow Double Pumpkin Ale
New Holland Ichabod Pumpkin Ale
Oskar Blues Gordon (Super Fresh)

Remember, you can always see what's live on our growler station by visiting our website at TheCharlestonBeerExchange.com and clicking "News/Growlers"!Follow us on Facebook and Twitter for real-time CBX news and updates!Cheers,The Charleston Beer Exchange
14 Exchange Street
Charleston, SC 29401
(843) 577-5446
http://www.thecharlestonbeerexchange.com
Rare Beer Tuesday with Stillwater Artisan Ales! (6/17)
It's almost Tuesday, and you probably already know what that means: Something super rare and extraordinary goes on the growler station at 5pm!  This week, we take special delight in bringing you the area debut of Stillwater Artisinal Ales based out of Baltimore, Maryland.  But take the term "based" loosely as Brian Strumke, owner/brewer of Stillwater, is what some call a "Gypsy Brewer".  Much like another CBX favorite, Mikkeller, Brian travels the world expertly brewing unique, very small batch beers at the facilities of other breweries where he has established relationships.  Our featured Stillwater beer this week will be Brian's "Cellar Door", a wonderful take on the Farmhouse/Saison style.  We only have a small amount of Cellar Door so it won't last long.  If you would like to read Brian's description of his beer, click HERE Rare Bomber Thursday with Oskar Blues! (6/19)
Our ultra limited, pre-filled 22oz bomber-style "growler" release this Thursday will be from Colorado favorite Oskar Blues!  For this special gem, Dale's Pale Ale was aged in Stranahan's Colorado Whiskey barrels giving wonderful notes of oak, vanilla, whiskey and maple.  This is a special and very rare experience, don't miss out!  Click HERE for a reminder of how Rare Bomber Thursday works.

New Arrivals/Back In Stock (Bottles)
Stoudt's Oktober Fest
Full Sail Ltd. Lager #3
Fruli Strawberry Beer
Lagunitas A Little Sumpin' Sumpin' Ale"Coldest Beer Dinner of The Year" at Ted's Butcherblock (8/26)
Please join us on August 26th at Ted's Butcherblock for a spectacular evening of cold craft beer and a delicious chilled menu!  This is going to be a night to remember.  Reservations required.  For menu and more additional information visit TedsButcherblock.com or call (843) 577-0094.

Remember, you can always see what's live on our growler station by visiting our website at TheCharlestonBeerExchange.com and clicking "News/Growlers"! Follow us on Facebook and Twitter for real-time CBX news and updates! Cheers,The Charleston Beer Exchange
14 Exchange Street
Charleston, SC 29401
(843) 577-5446
http://www.thecharlestonbeerexchange.com 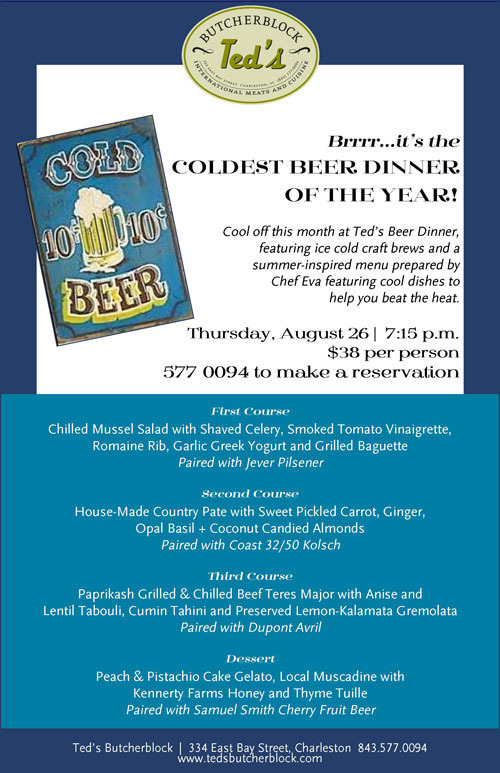 We have an exciting week ahead at The Charleston Beer Exchange!  Check out all the latest, refreshing happenings: 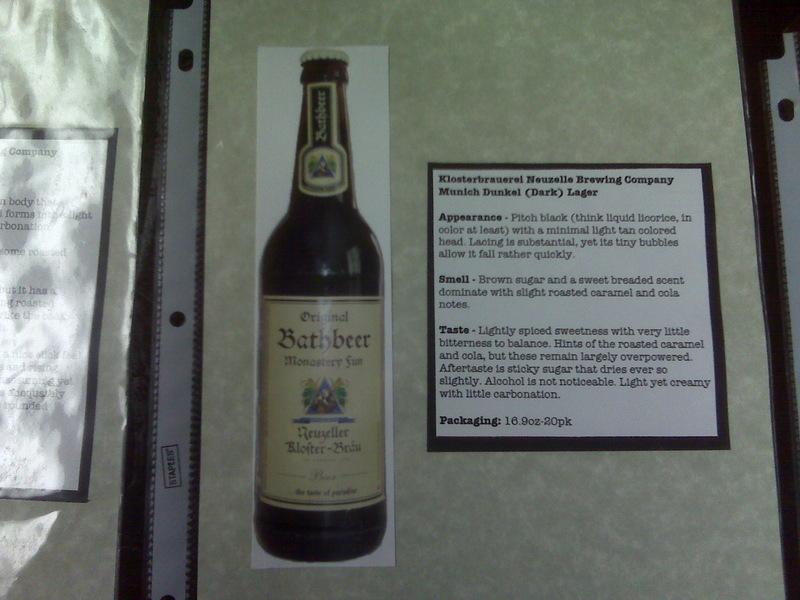 Rare Beer Tuesday - Sour Power! (8/10)
Tuesdays at 5pm we tap something super-extra-special on our growler station.  This week we're calling all you sour-heads because we'll be bringing you a fantastic and unique sour beer that has never before been released on draft: Petrus Aged Pale Ale!  A long time favorite, this beer has been bottle only in the past and will continue to be so in the future.  This is a one time only release the brewery decided to offer to celebrate their 30th anniversary with style.  In our opinion, this special release draft version is remarkably more sour than the traditional bottled version which is unbelievably exciting!  This beer comes in at 7.3% ABV and is aged for over two years in oak allowing wild yeast and friends

to produce striking tart notes with citrusy nuances that bring a crisp refreshing finish to this amazing beer.  More information on the beer here.

Highland Brewing Specials - Wednesday (8/11)
This Wednesday starting at 4pm, the boys from Highland Brewing will have Cattail Peak Organic Wheat Beer on our growler station along with some free Highland keychain-bottle openers and stickers with each growler fill purchase while supplies last!  They're also offering the very, very last of the extremely popular Cold Mountain 12 packs until winter!  Don't miss out!

Rare Bomber Thursday - Big Hops from The Bruery (8/12)
If you are not yet familiar with our new "Rare Bomber Thursday" program, please see our previous newsletter here.  This Thursday at 5pm we'll be offering pre-filled 22oz bomber-style "growlers" of The Bruery's Humulus Lager!  This highly limited, draft only beer is absolutely loaded with big, hoppy character and has rarely been seen in these parts!  Weighing in at 7.2%ABV, The Bruery calls this an India Pale Lager and says the lager yeast allows the hops to be in the forefront.  If you are a big IPA lover, do not miss this beer as it will amaze you!

Happy Memorial Day Weekend!  To help keep your weekend fun, The Charleston Beer Exchange will be open for normal hours everyday:  Monday through Saturday from 11am to 9pm and Sundays from Noon to 6pm.  We also have some great stuff going, check it out:

Dogfish Head ApriHop Growler Special
Starting at opening time Saturday (5/29) and running until it's all gone, we'll be offering special Memorial Weekend growlers of Dogfish Head ApriHop for only $9.99!  In addition, you'll get a free Dogfish Head pint glass with an ApriHop growler fill while supplies last!  There is no limit on growler fills, first come first serve.  Glasses are in limited supply and will be one per person only.  This is always one of Dogfish Head's most popular beers and this will be the very last chance to get this delicious apricot enhanced IPA for the year, don't miss it! New Arrivals/Back in Stock (Bottles)
North Coast Le Merle Saison
North Coast Pranqster Belgian Style Golden
North Coast Old Rasputin Russian Imperial Stout
Stoudts Heifer-in-Wheat Hefeweizen
New Holland Imperial Hatter IPA
Southern Tier Mokah (coffee/chocolate stout!!)
Montegioco Bran Reserva
Hitachino Nest Nipponia
BFM Abbaye de Saint Bon-Chien Grand Cru '09Follow us on Facebook and Twitter for real time updates and you can always see what's on tap live on our growler station by clicking "News/Growlers" tab on our website.Cheers,The Charleston Beer Exchange
14 Exchange Street
Charleston, SC 29401
(843) 577-5446
http://www.thecharlestonbeerexchange.com

Rare Beer Tuesday (5/11)
This week, we are using our normal "Rare Beer Tuesday" time slot for the world debut of COAST Brewing Company's first ever Belgian-style beer!  At 5pm, we will be tapping The Belafonte for growler fills.  It is a highly hopped Belgian-style Pale Ale with a golden color, fluffy white head, slight spice & wheat notes and a Belgian yeast tang at 5.7% ABV.  This is sure to be one of COAST's biggest hits to date, don't miss it!

Join Charleston Beer Exchange this Wednesday evening, April 28th, at Carolina's for a 5 course dinner that will feature the world class Belgian Ales of St. Bernardus!

It is rare to even see all 5 of these beers in one place, let alone to be able to drink all of them paired with Chef Bacon's luxurious food!

50 something booze and photography geek
Browse the Archive »